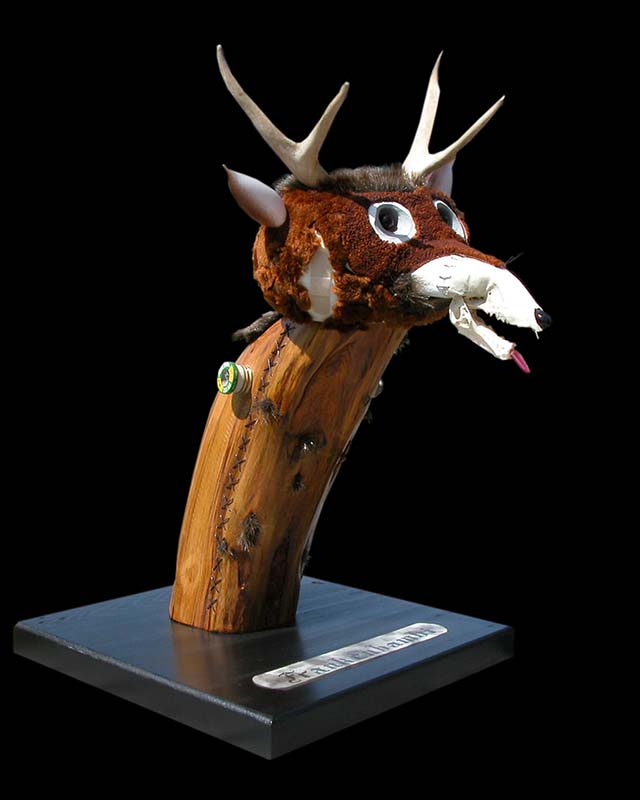 Demented but well-meaning scientists use available "parts" to patch up the iconic fawn, killed in a road accident.

Sometimes there are immensely disappointing moments in the creation of a piece of studio craft. It gets finished and it just doesn't work. It doesn"t engage. All the sketches and notes and work turn into ashes right before your eyes and there's nothing to be done about it.

But the cosmic scales seem to balance and sometimes there are immensely satisfying moments when it seems like unknown forces have conspired to lead you into unexpected territory and that territory is the promised land.

So I got a piece of black locust (locust trees have quite a tendency to twist and corkscrew their branches). It was well-dried but still covered with bark, which was very tenacious. I couldn't make any progress with a hatchet or pick. I had used a 6" belt sander on Frankenbambi's head and snoutal area but that wouldn't work on a big twisty piece of wood. Still, sanding seemed to be the only way to get rid of the bark. So I put a 36 grit "flapper disk" in my grinder, held my breath and pulled the trigger. (This grinder has horsepower like a GTO and I had no idea what kind of control I would have when it bit into wood.)

Yikes. Yeow. The bark disappeared. I made long smooth sweeps and the bark just vaporized. This is what happens when the hounds of hell are unloosed with industrial-rated Hitachi angle grinders. Then came that good moment I was speaking of earlier. As the bark disappeared, longitudinal striations appeared, with color variation and swirly paths around old partially healed insect borings. It still looked like a tree branch but it also looked like the musculature of a skinned animal. I immediately saw that some of the bug borings (with mutant bark inside them) would be left as scabs and others would be filled with tufts of fur. And one nice full-length line was just begging for a row of stitches. There it all was. Bark dust was still in the air and I knew that I had my neck.

Now, I knew Frankenbambi was going to be horrible and gruesome to the point where it should not be viewed by pregnant women or women who may become pregnant. Nonetheless, I wanted to evoke a little sympathy, a little compassion for the demented creature (as Mary Shelley did for the original). So I tried to place the head on a very slight cant; about 5 degrees, like the dog will do when you say "Good boy. You can have a Milk Bone tomorrow." This was a tough, tough cut, requiring a compound bevel because the neck was not a straight up-and-down column. I had to do an extensive review of my fifth-grade plane geometry lessons to get a line scribed around the diameter. The line was a wild deviation from what I would have intuitively eyeballed (and I'm pretty good at that) but one has to trust science so I got a very long blade for my Sawzall and carefully followed the mark. It was a nervous cut. If the angle wasn't correct I would have to start from scratch on a new neck and I really liked the neck I had (see paragraph 5).