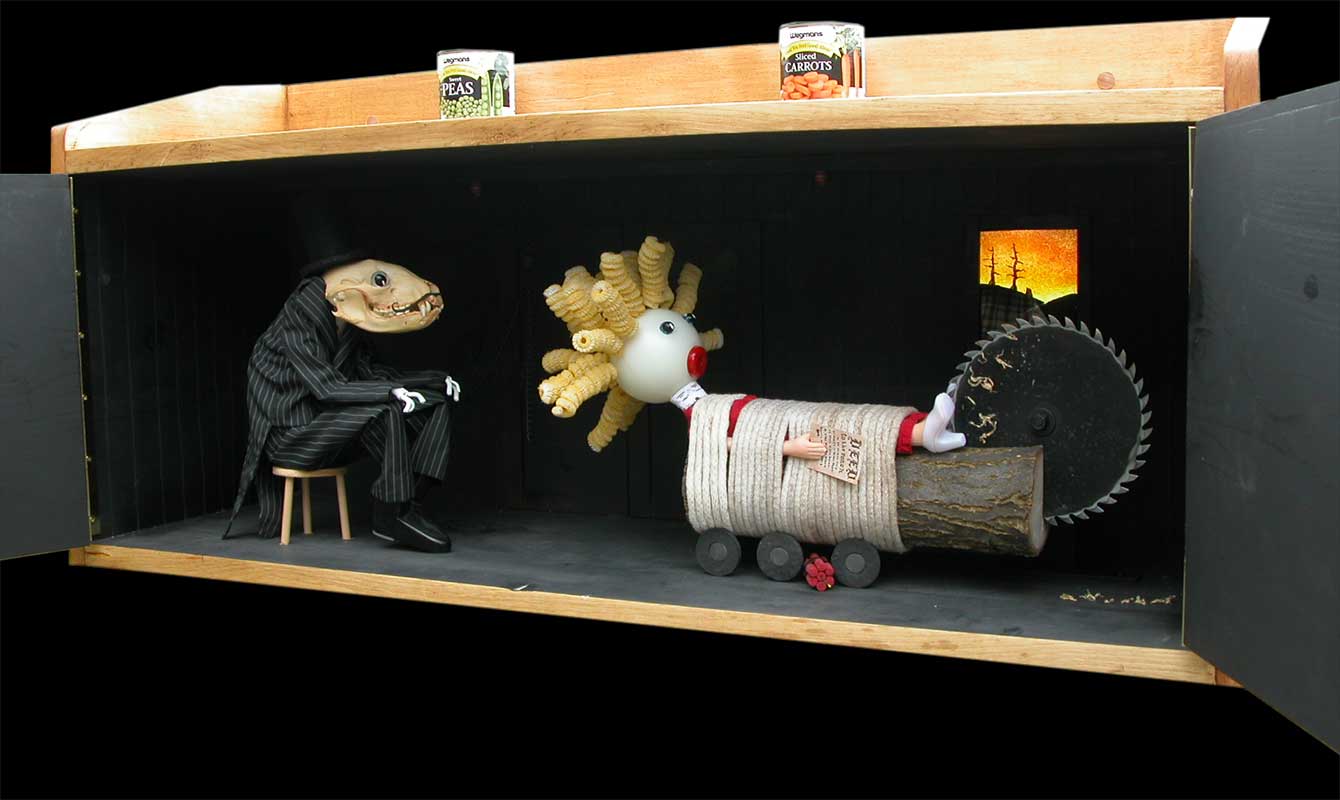 Little Nell Fenwick is coerced by dastardly Snidley Whiplash into signing off the deed to the ranch. (See Perils of Pauline, Rocky and His Friends, Along Came John for historical context.)

The outside of this piece is very different from the inside. I'm a pretty fair hand with a stencil and I had to dumb myself down here a little, sort of imitating the home handicraft look of cows and geese one sees painted on pieces of wood. Benign innocence is the deal (I considered teddy bears but couldn't bring myself to it).

So, you tell the kiddies to get a cookie from the cupboard ... aieee! It's not permanently harmful to fragile tykes though. I have three daughters and they are all successful. Two are postal workers and the other is pretty much okay (except when the last digit of the year is divisible by three).

I've already covered the Snidley Whiplash theme in the ANT FARM 1.2.3.4. notes so if you didn't read all of them go back and do that now. Actually, this piece is sold and my buyer insisted on some interior lighting, which I had thought about earlier but decided against.

Anyway, back to the lighting. It turned out to be a good addition, which shouldn't have surprised me since my buyer is not only an international rock star but a killer graphic artist as well. He has good instincts. But lighting the piece was complicated. I couldn't just flood the interior by sticking a lightbulb in the back. There is a spooky atmosphere to be maintained and a lightbulb lying on the floor would look dumb and also have the same effect as a flashbulb in your eyes. So I went with overhead theatrical type spotlights, using some principles from mechanical design: it should be 1. simple 2. reliable 3. easy to maintain.

I bought little flashlights ("torches" for you Limeys out there) about 1/2" inch in diameter with pressure switches (that is, light goes on when you push the little dingus sticking out the end and off when you release it). Then I bored 9/16" holes through the "ceiling" and wrapped tape around the flashlight's diameter to make a press fit in the holes. The business end sticks out about an inch and directs a cone shaped spotlight into the rear interior. Now I had two flashlights sticking out the top of the cabinet that had to be hidden and also needed a way to get switched on and off. Staying with the innocent look, I got a can of peas and a can of carrots, opened the bottoms (giving the veggies to indigent animals) and jiggered the inside of the cans with lead weights and a step arrangement so that by slightly lifting and moving the cans you can step on and step off the pressure switches. Wa-lah. What's more innocent than peas and carrots.

Snidley Whiplash's head is a raccoon skull (it is, after all, a nightmare). I've used skulls and bones in several pieces and look for opportunities to use them. Maybe I should explain this. I don't have a Jeffery Dahlmer fixation with animal skulls. Neither do I presume to be milking any karma from the spirit of the previous owner, as I'm told the Indians used to do (before they had casinos). But I often find skeletons when I'm walking in the woods and the skulls in particular are so astoundingly elegant that it seems a waste to just let them return to the soil. So I kind of give them a second life, and you'll never see an artist or a designer or an engineer produce a prettier piece of work.