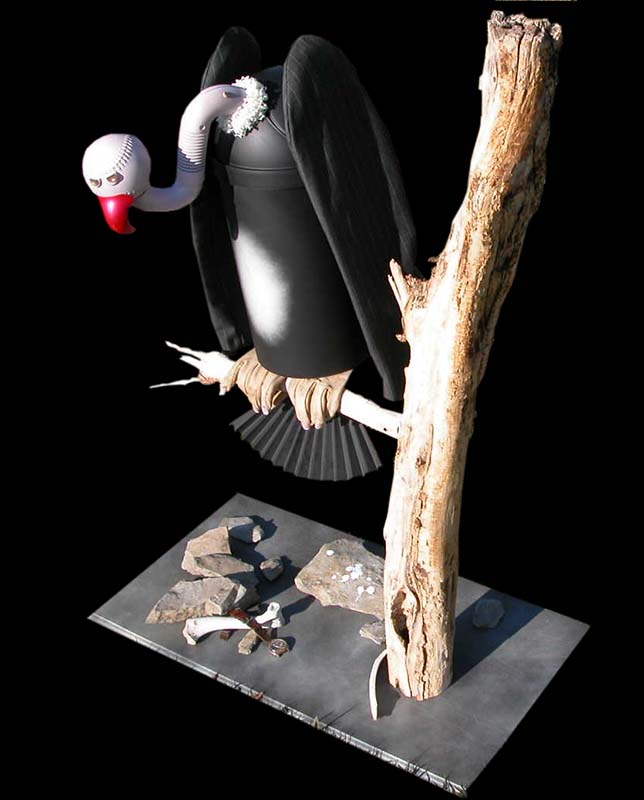 Vulture perches on a ghostly limb above a desolate landscape with sinister remains.

Before picking apart the vulture I should probably comment on some of the text being overly conflabulatious. I try to keep the tangential stuff to a minimum (one day I was trying so hard I thought I was sweating blood, but it turned out to be grenadine on my shirt cuff). Regardless, I was engaged in a (failed) campaign to stay on point but then Jenny Madia (celebrity minx-about-town) was in my bar one night demurely downing a few growlers of Newcastle and said she had been to the site and "... read all the text twice, but not compulsively." So that was that. Onward.

Early in the design of this piece I knew I wanted a softball for the head. It was the right size, bald and I could see (in my mind) that the stitching could be a brow ridge as well as a mouth line. I didn't want a real hostile, angry look, just a suspiciously cunning gaze. I found that it didn't matter that the stitch line extended; if it was correct where it met the eyes and beak the frown was accomplished and the line could wander off anywhere it wanted.

I assumed that finding a softball would be the absolute least of my problems in building this piece. Not so, as I found out after visiting three "sporting goods" stores. Most of the stock in these places is shoes, selling for the kind of money I ordinarily pay for a car. I did find some softballs but they were green - almost florescent lime green. Store staff was not particularly hip on softball-ology but I was able to distill the idea that green softballs are for girls and retards (don't shoot the messenger here - I'm only reporting) and regular old white balls are for men's leagues, which there aren't any of anymore. After about a month (Persistence was my middle name before I had it legally changed) I found white softballs at Dick's Sporting Goods, which is a very nice big store, especially if you need footgear.

I like the cartoonish renditions of lawyers as vultures so it was a natural to use pinstripe suitcoat arms as wings. I sawed the forms out of light plywood, leaving very distinct peaks at the top (you know how perching vultures always have their wings kind of hunched up). The body is a small version of those trash containers you used to see in public places where part of the top swings in and out and says "PUSH" on it. The wings were to be attached to the swinging part because I needed the more solid front to mount the neck and head. I wanted the wings to hang fairly close to vertical so I needed to put some curve into them. Weight was a consideration everywhere so I used light steel strap to hold the curve. I got the curve by putting the forms in a very big bar clamp and screwing in the jaws, causing the form to bow. Then I hammered out the same curve in the straps and screwed them in lengthwise (grinding off the screw overage). The strap kept the plywood from unflexing and I had my curve. I soldered a short bolt near the top of the strap for attachment, put the bolt through a hole at the right spot for the hunched-up look and put a nut loosely on the inside. Gravity (what would we do without it?) makes the wings hang naturally and the two of them equalize the flapper thingy so no edge is sticking out.

I am more of a designer/technician than an artist (which is better than being more of a pompous charade than an artist) but I did have a brush with greatness while building VULTURE. It happened when I was splattering white paint on one of the rocks for bird poop. I said to myself "Jesum Crow! This is how Jackson Pollock felt when he was slinging paint all over the place." But then I realized that I was aiming the paint for a purpose and the moment passed. Easy come, easy go.